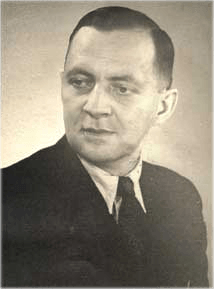 Grandfather of Ludwig Prinz
Born 30 July 1909
† 11 December 1969
Ludwig Salomon was a commercial employee until the start of the second world war. After he fully recovered from a major war injury he worked for the German Institution of Cartography. He earned his living doing part time jobs as a graphic designer. After the great depression in Germany he was hired as a cartographer at the company Mayr in Stuttgart.

In collaboration with friends he came up with the idea of drawing a perfectly scaled map of Vienna viewed from above. Living in Vienna again and working as a cartographer at the company Hölzl, he began the grueling work of creating the plan. Beginning in the year 1964, he started researching, planning and drawing the map piece by piece. After four years of hard work he finally finished it in 1968. Unfortunately he could only enjoy his beautiful map for one year. He died unexpectedly on 11 December 1969 because of a heart attack. My aunt, the second born of his three daughters, then took over the rights and publishing duties. 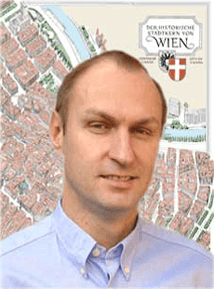 Grandson of Ludwig Salomon
Born 18 October 1962
Profession: Printer
The first time I was involved with the work of my grandfather I drew newly built buildings, which were missing on the outdated plan, like the Marriott hotel, Haashaus and the Hotel Plaza. As commissioned by the “Lebisch” agency the updated map was to be presented in advertising glass cases, called “Citylights”, placed all over the first district by Gewista.

At the time my aunt was the official publisher of the plan. However, due to my drawing additions I acquired the copyright. The idea of further updating the map by adding the new outer ring of Vienna was born at that time.

It took until 2007 until I finally realized my idea and finished the project. Now I am glad to be able to publish this beautiful, up to date map of the city of Vienna!

Sign up now and get 20% off your entire purchase! Just check your email for the discount code.